Congratulations? Why, thank you! I’ve quietly acknowledged it thus far with a Buddhist monk’s lack of excess but as the surprisingly summer-like Summer ticks along, I think I’m going to let my hair down.

It’s both this tremendous, thrilling opportunity and a mixed bag that creates ambivalences and internal torsion. There – said it. This is something I can only resolve by being blunt. I will get to that, later.

So, what is this thing?

The Winston Churchill Memorial Trust enable good works at home by facilitating people with great ideas to travel abroad. We learn, bring back fresh ideas and share them in our communities, making a difference as best we can.

I’m on a mission. You know my mission, right?

This project takes me to Nigeria to study fractals and how they manifest in West African culture.

A self-repeating pattern you sometimes see on the back of seashells in nature. Or projected onto grimy nightclub walls while the bass speaker batters your ringing ears at a rave after dark.

Discovered in Europe in the 18th Century, it turns out they’ve been manifest and deeply inter-woven in West African architecture, clothing – and hairstyles – for millennia. The self-referential data structure at the heart of this design is the basis of modern computing.

You can’t be what you can’t see

I’m going to bring back what I learn and teach it in Moss Side. Fractals in hair and hip-hop are culturally-relevant entrées in to computer science. Seeing yourself reflected back in the world matters. 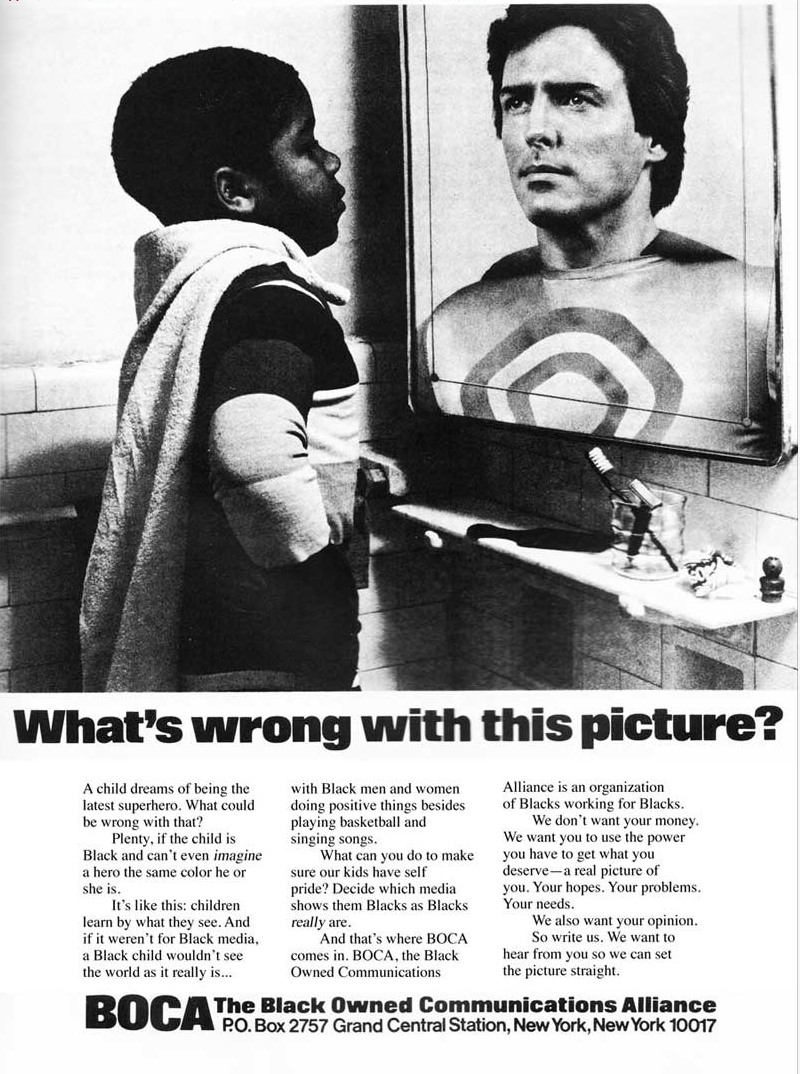 I see you, though. 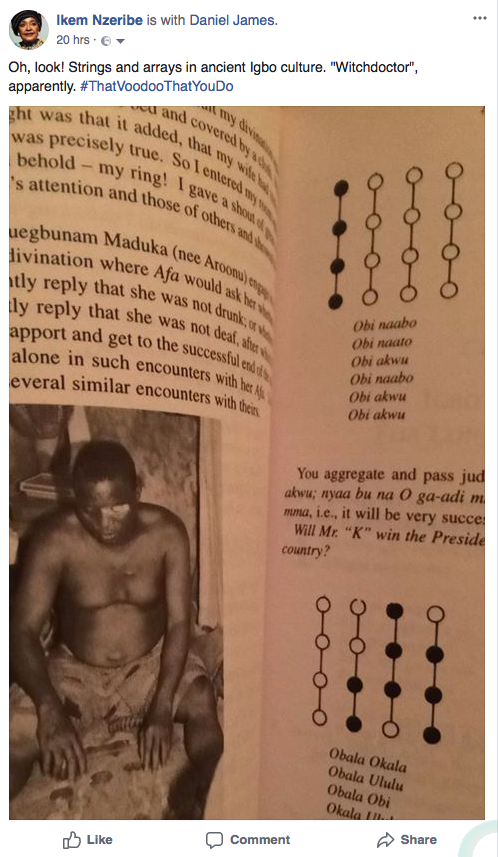 It’s no wonder that indigenous African sciences were dismissed, by white men upon first contact, as “voodoo”. Look familiar?

Like fractals, deeply embedded in the fabric of African culture for Millenia, these were concepts far in advance of anything seen in Europe.

Could it be that repetition and pattern embedded in our music, art, architecture – and hair – give us cultural aptitudes pre-disposed to computational thinking? 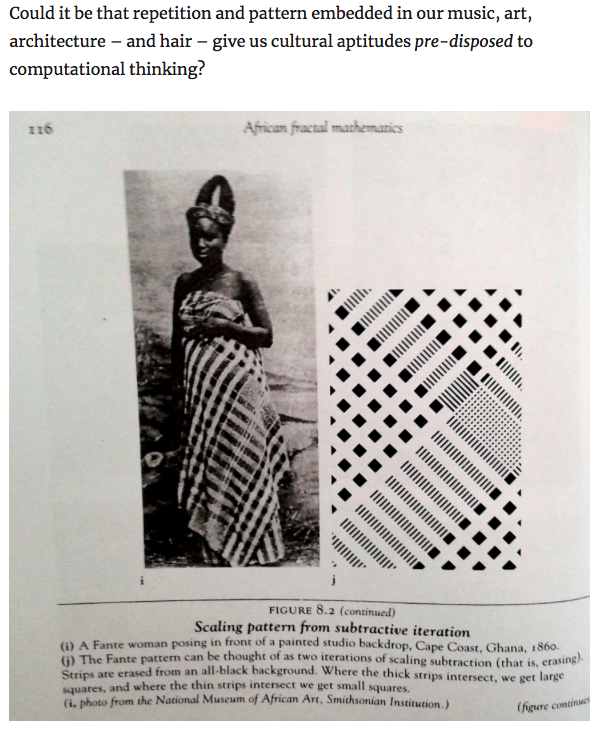 This line of thinking has interesting implications – but I’ll come back to that.

You heard the man. Go!

The answer, mistakenly attributed to the bank-robber Willie Sutton on the question: Why do you rob banks? 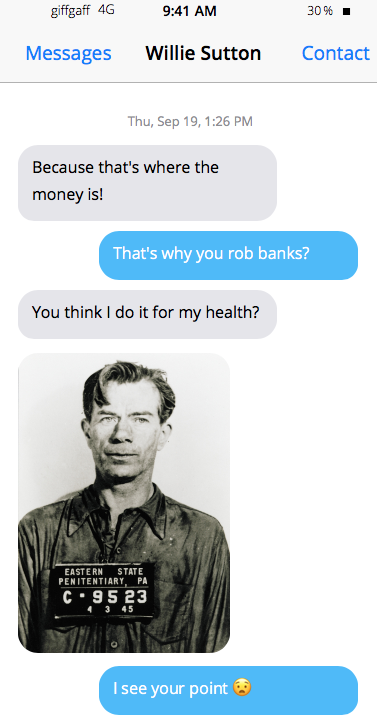 The game has changed. 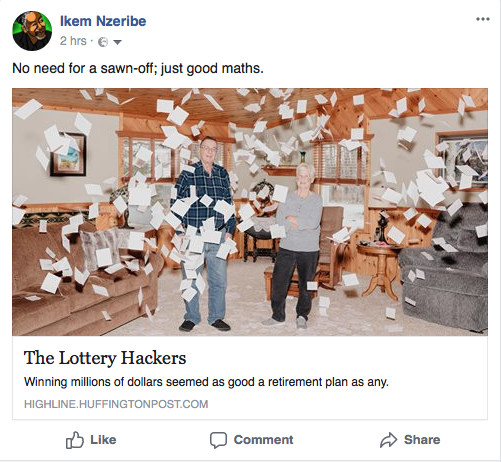 The trends are obvious: with the automation of all manual processes on an exponential pathway, tomorrow’s bank heists use brain, not brawn. There may be highly lucrative pastimes for hobbyist mathematicians that obviate the need for brandishing the rolling thunder of this genius rap duo’s quite formidable arsenal.

I’m obviously a huge fan of maths literacy. The Old Lags of the infamous Hatton Garden heist were men caught out of time.

Indeed, where is the place for violent armed robbery in a cashless society?

Why risk a life behind bars when you can just disappear into the night?

Will the ultimate legacy of #MeToo be the creation of a new glass ceiling for women? The hashtag evolved from powerful beginnings into an adversarial wave. It needed care; none was taken. Those who plead for caution in the Deneuve Letter were publicly sandblasted. I understood the thrill of score-settling, but a new kind of gender-specific workplace injury was always likely be to the end result.

Whether care was taken or otherwise, a reactionary corporate collective “punishment beating” of sketchy legal standing that hurts all women in the professions is not the right way to respond. At all. You wouldn’t think that sexual harassment itself was all that difficult to define:

In order to head off the problem coming down the track, Sheryl Sandberg has pulled together MentorHer, a kind of “Pence Rule” Kryptonite – designed to facilitate working relationships that encourage the growth of female junior colleagues into more senior roles. That it appears to hinge on goodwill is an issue. The upside being sold to fearful, risk-averse management is diversity: diverse workplaces perform better! The data is in. The case, however, has been poorly made and largely falls on deaf ears.

Even if this idea gains traction, diversity itself has become a problematic monocultural paradigm in its implementation. Worse, racial representation is infamously ignored at the company where Sandberg herself makes her name.

Initiatives like #MentorHer need joined-up thinking to succeed – and it can work, but but only if the performance/ profit case for diverse workplaces is made front and centre, reflected in powerful organisations like Sandberg’s own social media colossus which comes up short year in, year out. Money talks.

Who was AAL (as she referred to herself)?

Perspective is a wonderful thing.

We must remember the context of the times in which these Great Leaps Forward were being made: the Industrial Revolution, the subjugation of indigenous peoples and the enslavement of millions of innocent people that fuelled it.

Europe was busy carving up the African continent at the time and using it’s military might to destroy great, ancient cities upon which its civilisation were built. Scores of African cities, libraries and centres of learning were razed to the ground by the armies of England, France and Germany. 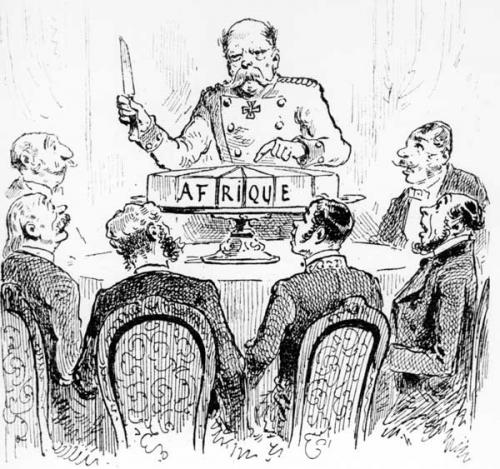 Malicious, deliberate acts of erasure have Black people, in the absence of records, endlessly re-inventing the wheel – unaware that we pioneered the same fields hundreds and even thousands of years before. The achievements of Ada Lovelace, as mighty as they are, must then be placed into the historical context of a world in which Black flesh and bones were (and still are) expendable. 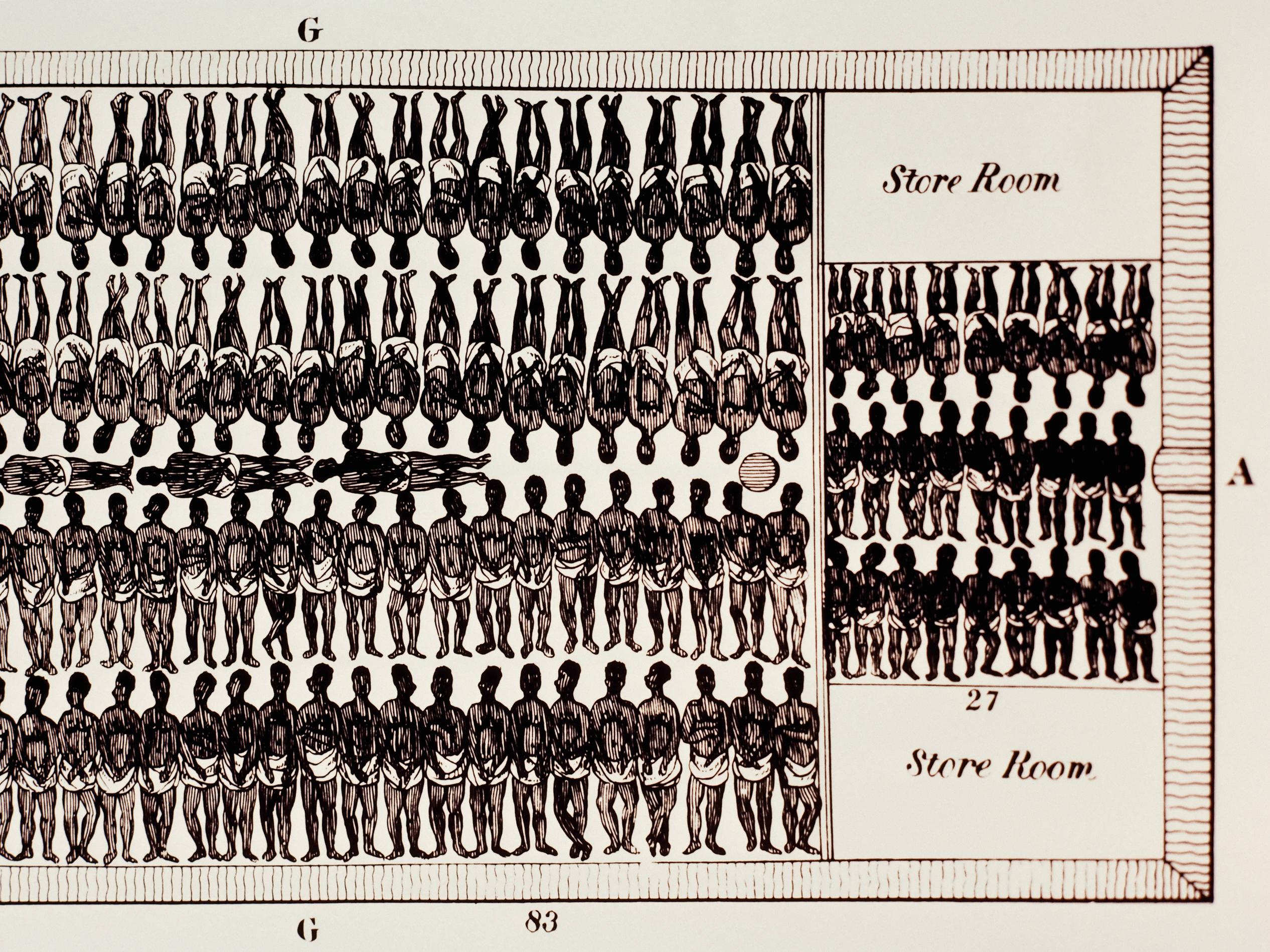 We were quite simply the consumables that powered the railways, steam engines and funded Brunel’s terrific feats of engineering. We would do well to remember, if we will, that modernity is built upon a legacy – one of a mathematics and binary principles that emerged on African shores long before Europe emerged blinking from the Dark Ages into the light of the Renaissance. It’s legacy we must build upon if we are to forge our technological independence.

Our learning should always reflect who we are as Black people.

Could it be that repetition and pattern embedded in our music, art, architecture – and hair – give us cultural aptitudes pre-disposed to computational thinking? 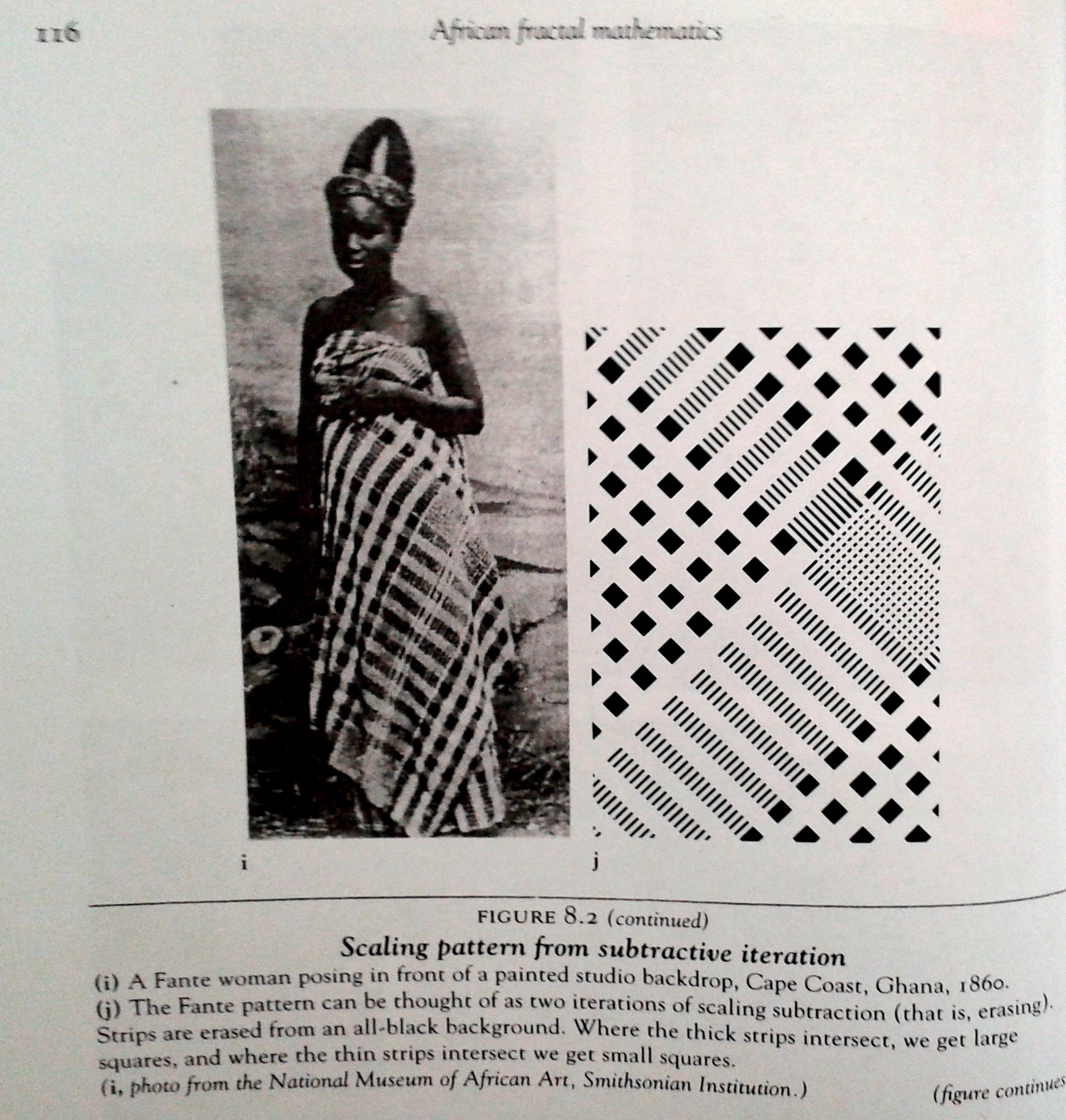 Horrible diversity figures in the science and technology fields reflect society, not our ability.

“That lie is that there is some sort of pipeline problem preventing tech companies from hiring more black people.” https://t.co/iDcKsOLnE4

I’m with the underdog. I intend to bet against the house, but then, I am that way.

I returned, jubilant!, from a small-but-perfectly-formed conference in The Smoke to a sadness. While we listened, dialogued and wondered whether science could be decolonised – an expression of similar movements on-campus around the world – Chuck Berry died. Damn. Seriously, why man? I’ve tired of asking.

The need to innovate and make that next sh*t is a primary drive in Black cultural production.

We invent new forms, and re-imagine the old:

The same is true of all forms to which African-descent people have access. The question is one of access. The unseen forces, the Dark Matter of Black cultural production bends all to its will, re-making a thing in its own image.

Why would it be different with code?

The same forces are at work in technological space.

Black Twitter is a force. It’s also not particularly well understood by those who aren’t a part of it. The term is used to describe a large network of black Twitter users and their loosely coordinated interactions, many of which accumulate into trending topics due to the network’s size, interconnectedness, and unique activity.

Rock’n’roll was once so characteristically “Negro” it was called “race music” and ignored. Race music. Here is your daily reminder that Black people did rock first.

There’s an opportunity here. I think that Black hackers twist things and invent and bend ones-and-zeroes to their will, the way everything else must obey our cultural vodun. 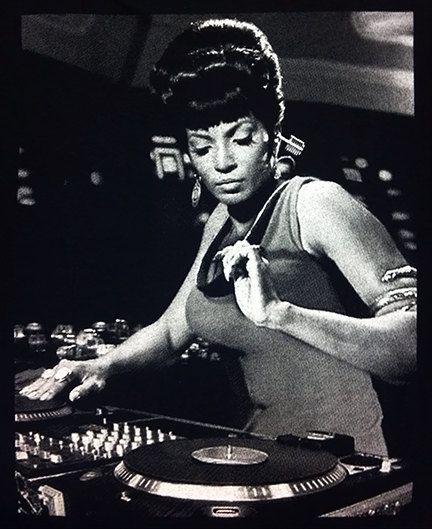 The point is rhetorical: not to recreate the old, but invent what comes next. We are a force – under-served and under-valued, as per. To assume that coders focused on Black audiences are bound to be ignored, and the things we imagine must be derivative, marginal efforts, doomed for the digital knacker’s yard is off. I say: let’s form all-Black hacker collectives and throw down. I say: what we make blows the fuck up, like always.

The problems I see down the road are different: how do maintain control of the fruits of our labour? The issue is so persistent, it bears thinking about now.

The premise of Jack Hamilton’s deep new study Just Around Midnight: Rock and Roll and the Racial Imagination seems like something that’s been on rock history’s tongue for a long time without ever quite leaving it. Chuck Berry, a black man with a guitar, had been a rock and roll archetype in 1960, but by the end of the decade Jimi Hendrix would be seen as rock’s odd man out for being… a black man with a guitar. How did that occur? “Tracing the Rock and Roll Race Problem” an interview in Pitchfork.

The relationship between Europe and Africa, white culture to Black, is that of vampire and victim.

Colonialism is the parasitical asset-stripping of our resources – material, creative, cultural.

Serving the computing needs of Black audiences – domestically and in the Diaspora – is also a hedge against the under-employment faced by computer science graduates who can’t get jobs in Silicon Valley, or face hostile working environments once they do. Given all of that, I’m optimistic. I think we can do this.

This is a really good introduction to the ideas behind Afrofuturism, and why it matters. The first part is here (via Colorlines).

Imagination matters. It takes courage to imagine yourself in a future and define it your way, as a place where you exist, are wanted, and can flourish. You won’t find it on Netflix. We are the underground – but most heroes worth a damn are punching up.